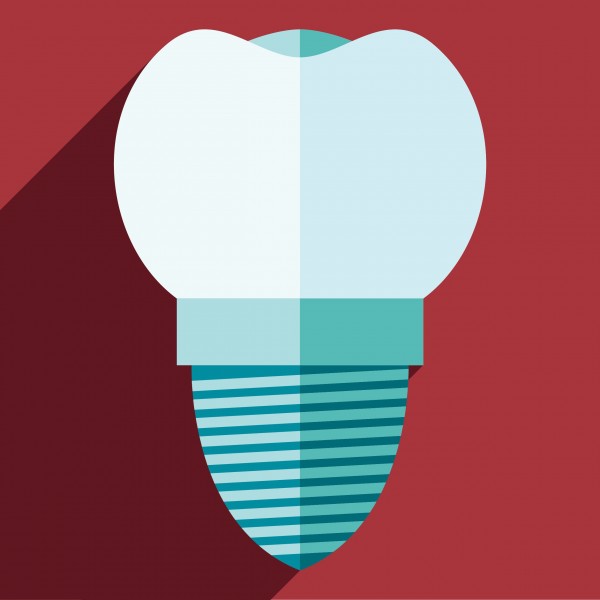 In parallel with the Swedes in the late 60s and early 70’s, a Swiss research group called the International Team for Implantology (ITI) developed a titanium implant with a slightly different design than the Branemark. It has a titanium screw with threads on the outside. Instead of being polished smooth, it’s rough on the body and is only smooth around the collar.

Improvement Over the Branemark

Research has shown that because of the implant’s rough surface, bone cells adhere better and fast. This also makes bacteria less likely to colonize. Instead of being external, the abutment interface is internal. This allows it to fit into the interior, while being supported by the implant walls, essentially eliminating the breakage of abutment screws.

The greatest design improvement that the ITI fixture has over the Branemark is that only one surgery is needed. It is designed to be placed in the jaw with the rough surface facing the bone and the smooth-flared collar facing the gums. This trans-gingival design meant that once a healing period of 4-6 weeks has passed, the gums are completely healed, and no second stage surgery was needed.

The rough surface facing the bone also means that the bone healing or ‘osseointegration’ period is four months shorter than other implants. Treatment time was shortened as well, with fewer visits to the dental office and less surgery.

Why Does Preserve Your Teeth™ Use the ITI Implant?

Our office exclusively uses the ITI system. The single stage trans-gingival design eliminates the micro gap at the abutment-implant interface and bacteria stays above the gums, no longer getting near the bone. With little to no bone loss, this leads to long-term bone stability, a long-lasting implant restoration, and fewer failures.

This is exactly what we observed in our clinical practice at Preserve Your Teeth™. Since switching to the ITI (now known as Straumann AG, Basel Switzerland) system in 1999, we now see 15, 16, and 17-year results from our work. Without exception, and among every case during follow-up, we see no bone loss around ITI implants and excellent gum tissue health. There has never a broken abutment screw.

Recent large clinical studies from Sweden confirm our findings. That the ITI implant is four times less likely to have bone loss that other implant types.

So why doesn’t every dentist use this implant type? More in that next week.