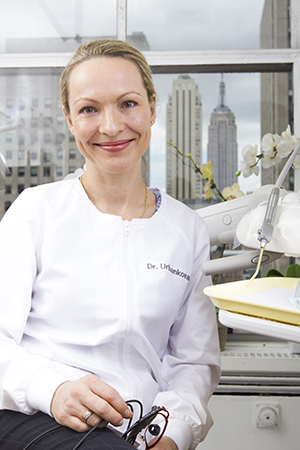 Dr. Urbankova's philosophy as a clinician is unique and was developed through years of teaching dentistry, conducting clinical research, and is soundly based on understanding clinical science.

Dr. Urbankova practices artistic, minimally invasive techniques. This approach is founded on conserving your tooth structure rather than radically removing it. Minimally invasive dentistry follows a new paradigm in dentistry, as it requires minimal surgical intervention, and has long-term benefits. Rather than invasive treatments that often lead to loss of tooth structure, complications, tooth loss, and possible overall health problems, minimally invasive dentistry's goal is to preserve your teeth and leads to a prolonged life-span of the patient's natural smile. Dr. Urbankova's clinical practice of dentistry is sure to bring a naturally beautiful, healthy and lasting smile. As an educator understanding the importance of teaching high quality dentistry to her students, she maintains the same standards for herself. Dr. Urbankova believes that tooth intervention must be kept to a minimum. Within that philosophy she developed and practices unique noninvasive additive techniques in the area of cosmetic dentistry that do not alter original tooth structure. See more for yourself.

Dr. Alice Urbankova is a graduate of Columbia University College of Dental Medicine. She began her full-time academic career at Columbia University College of Dental Medicine, in the Division of Operative Dentistry. Besides teaching students operative dentistry using traditional methods, she became engaged in teaching through simulation technology. She devised and implemented a virtual simulation teaching method in the pre-clinical curriculum to wide acclaim. Her research and expertise in simulation technology led to a consultancy with Image Navigation Ltd., and she trained and calibrated faculty at eight North American Dental Schools, and was a trainer and instructor at forty dental schools throughout North America and Europe in simulation teaching methods. She also became a consultant to IDEA Inc. and MOOG Inc., using both haptic technology for simulation learning and skill assessment. She was recruited to Stony Brook University School of Dental Medicine where she revised and implemented a new operative dentistry curriculum, with virtual reality simulation at its core. She became Division Director of Operative Dentistry, and besides teaching, clinical instruction, developing lectures and operative curriculum syllabi, she conducted numerous research projects validating simulation technology in dental education. She also became involved in research projects in areas on disease prevention and relationships to systemic health such as diabetes.

Dr. Urbankova has served as Chairperson of the Simulation Section of the American Dental Educators Association, and is a member of the Educational Research Section of the International Association of Dental Research. She has lectured internationally, and is frequently an invited lecturer at international conferences such as the Association for Dental Education in Europe. She now holds an appointment as Clinical Assistant Professor at New York University College of Dentistry. Dr. Urbankova has devoted her teaching and academic career to promoting excellence in operative dentistry and improving teaching methods through virtual reality simulation technology. Her clinical work has focused on minimally invasive treatment modalities.

In addition to her DDS from Columbia University, Dr. Urbankova holds the Doctor of Medicine degree (MUDr), with a Specialty in Dentistry from Palacky University, Olomouc, Czech Republic, and a PhD from Palacky University, Olomouc, Czech Republic for her dissertation, “The Role of Simulation Technology in Pre-Clinic and Clinical Operative Dentistry Performance, and Dental School Admissions: A Novel Method for Identifying Non-Cognitive Skill Development Potential.”

Besides her wide range of medical and dental training, she finds that the arts and its various forms – painting, sculpting, photography, jewelry design and fabrication—are an inspiration for methods to achieve cosmetic dentistry. She brings a unique approach to dentistry combining art and science.